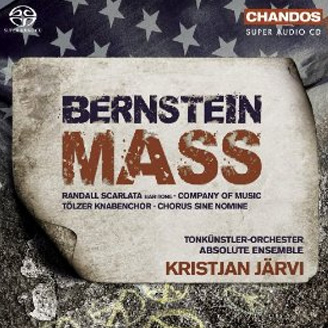 NOW AVAILABLE! FIND IT ON:

Note: This album has two CDs. Second CD single MP3 tracks can be purchased on Amazon or Google Play:

'He was a great individual, totally unafraid to take risks and largely misunderstood because people didn't see his universality' --Kristjan Jarvi on Leonard Bernstein. One of his most controversial compositions, Bernstein's Mass was written at the request of Jacqueline Kennedy Onnassis for the opening of the John F. Kennedy Center for the Performing Arts in Washington DC and received its gala premiere at the venue's opening on 8 September 1971. Bernstein declared that his intention in writing the piece had been to communicate as directly and universally as I can a reaffirmation of faith. Recalling Britten's War Requiem in its use of Catholic liturgical text interrupted with commentary, the work caused a storm of controversy particularly with its exploration of the concerns of the era Nixon and Vietnam. Unlike Britten, however, as with many of his compositions, Bernstein brought together an embarrassment of riches of musical styles both classical and popular music at the start of the 1970s. The New York Times notes, Bernstein left nothing of himself out of Mass, and like the man who wrote it, the piece demands to be noticed... beneath the original dramatic conception, the creative exuberance, the showbiz glitter and the ear-catching set numbers is a sophisticated, carefully controlled piece of musical craftsmanship that repays close scrutiny... an extravagant, exuberant and endlessly inventive creation... Mass is now recognised as one of the central works of Twentieth Century American music, and its political and cultural importance as well as amazing music extends its relevance to today.

Leading Baritone Randall Scarlata takes the role of the celebrant, a role he has performed on many occasions. He is especially recognised for his performances of American repertoire. The Boston Globe recently commented, A triumph this baritone has in his keeping the vocal wherewithal to do just about anything he wants.

"Leonard Bernstein's Mass has been superbly recorded by American and Austrian performers under Kristian Järvi (hybrid SACD 5070 2, two discs). The Celebrant, the most important solo role, is the fine American baritone Randall Scarlata, as are the members of the Absolute Ensemble who form the work's jazz group. Nearly everyone else is Austrian, including the work's three choral groups: Company of Music (street chorus), Chorus sine nomine (main chorus) and the Tölzer Knabenchor (boy choir). The orchestra is the Tonkünstler-Orchester Niederösterreich. In the choral singing, accent is never an issue. Much of the text is in Latin and most of the English is written at such a high emotional pitch (with wonderful jazzy rhythms) that if they sing with a German accent it goes completely unnoticed. Bernstein being Bernstein, the work is totally theatrical; parts of it sound like "West Side Story" in a quasi-devotional setting. Whether you are convinced by it as a work of art depends on how much you are willing to allow Bernstein to interpret your innermost feelings for you. Many, including TC, demur. This work begs for SACD sound, which it gloriously receives. " -Turok's Choice, Paul Turok, June 2009